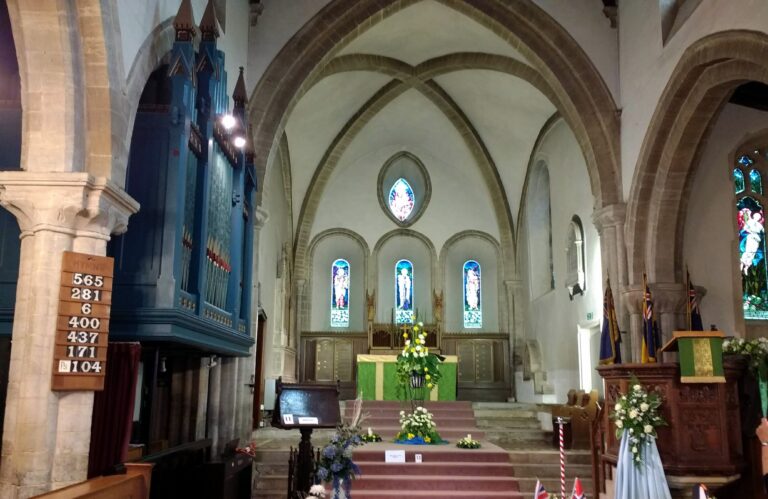 This was built in pure Norman style about 1180 and is internally about 20 feet square. Its vault is distinguished by broad heavy unmoulded cross-ribs. The east wall has three round headed lancets and an unusual fish-shaped (or ash) window above. On the south side is a double piscina under a canopy and the remains of a plain sedilia in three compartments. There were south and north two bay chapels which opened into the chancel. By the south door are the remains of a chapel, evidently in ruins before Prebendary Robins died in 1673, since he requested the word ‘Resurgen’ to be cut on a stone close to his grave. That stone is on the outside of the south wall of the chancel. Close to the east buttress is part of a column, and its capital (one of three) is built into this wall.

On the north side was another and larger chapel (in what is now the vestry) are parts of two pillars of the same type as on the south side. There also a broken piscine, shelf and aumbry – a recess to hold the sacred vessels for Mass and Communion. The east wall of the chancel, seen from outside, is a splendid piece of Norman work with pilaster buttresses. The dressed stone work extends to a little above the top of the ellipse window. The rest is rubble work carried up when a long high-pitched roof took place of the old flat roof. In this rubble work there is a round-headed window blocked up; evidently there was a priest’s chamber over the sanctuary, approached in much the same way as the roof loft was entered from outside.

Returning to the inside, the fine substantial pointed chancel arch is supported by a pair of magnificent clustered half-piers (or responds), one half with a scalloped capital at the same height as the piers in the nave, while the inner half is carried much higher to provide the necessary elevation for the chancel arch.

The lectern, according to Black, is probably the oldest double lectern in the country, about 1450. It had, until earlier this century, the original chain and the great Bible (the cover of which had the Tudor rose stamped on both clasps and bosses) with a brass-bound and chained copy (according to Kelly’s Directory) of Dean Comber on the Book of Common Prayer and a black-letter copy of Erasmus’ Paraphrase of the New Testament. At the top of each buttress is the figure of an Evangelist: the originals were stolen in 1934 and copies made in 1972. The rotating top is mostly 19th century. (31)