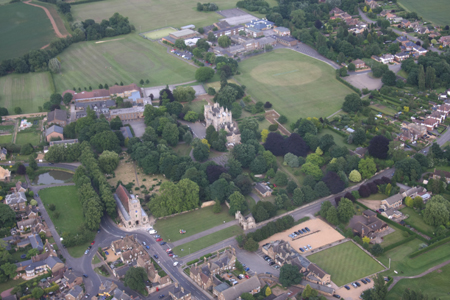 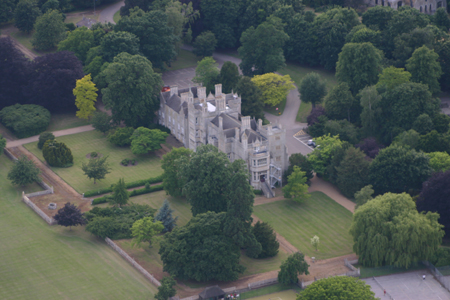 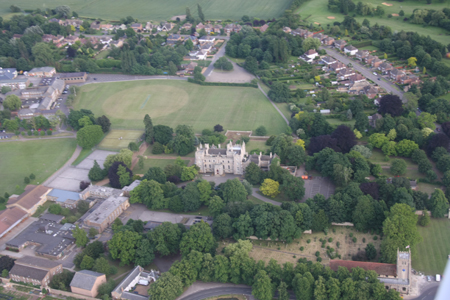 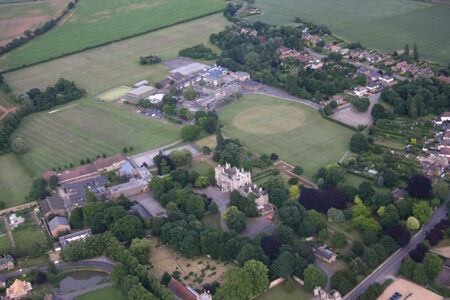 The above aerial photographs show the Abbey House and St Thomas a Becket Church, this is  generally the area where we think the Abbey stood. Unfortunately the exact spot is still unknown, even after extensive searching using modern equiptment.

The Great Benedictine Abbey of Ramsey, dedicated to Our Lady, St Benedict and all Holy Virgins, was the first of the great religious houses in Eastern Fenland to be founded and in its time one of the most important, influential and wealthiest Abbey in the Fens. In its heyday it was home to at least 80 Monks, and behind its walls a renowned school was founded by the great scholar, Abbo, who came to Ramsey from Fleury, a notable Benedictine Monastery in France, in about 985, and instructed the Monks in the arts. He stayed for about two years.

It was also the home of a famous Library, which in its time was probably one of the largest Abbatial Libraries then existing, full of manuscripts and books, some of which still survive today in the Ashmolean catalogue and the Cottonian Collection.

For over 500 years the Abbey flourished, but in 1539 the Abbey was dissolved by Henry VIII. Then it passed into the hands of Sir Richard Williams (alias Cromwell), from then on it was used as a surface quarry and gradually it was destroyed, being sold piece by piece.

Today there is very little to see of the once great Abbey, only a wonderful 15th Century Abbey Gate House and an impressive wall separating the School from the Churchyard and Abbey Green, which uses fabric left over from the destruction. There is also the Abbey School which incorporates a lot of Abbey stone into its structure, and in the basement there is a part surviving 13th century Lady Chapel? The Parish Church of St Thomas a’ Becket has its bell Tower constructed from Abbey stone too, it was built in around 1672.

I would like to thank the Huntingdonshire Local History Society for the generous donation given to me, from the Goodliff Fund, which has enabled me to set up this site. I hope it will help to generate interest in the Historic past of Ramsey, this once important Fenland Town.

Also I would like to thank Ramsey Rural Museum, for allowing me to use their extensive set of archives, for research into the History of Ramsey Abbey. Also Ray Leonard who has collected and written down over the years many details about the History of Ramsey Town and the Abbey, which he has kindly donated recently to the Museum archives.