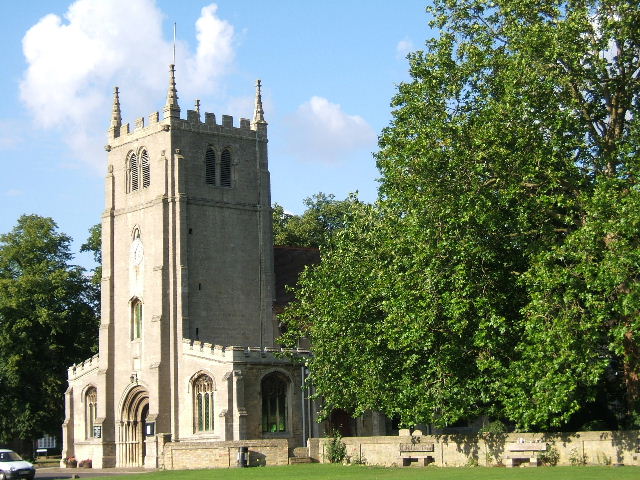 The Parish Church dedicated to St Thomas a Becket, is thought to have been the original hospital, infirmary, or guest house of the Abbey.The present building, which was originally erected about 1180, is of a peculiar plan. The very small chancel, the long nave, and the absence of a tower from the original church, suggested to the investigators of the Royal Commision on Historical Monuments that the building was probably designed for the Hospital, infirmary or guest house of the Abbey. The chancel would form the chapel, and the nave the main hall.

As in the case of all Monasteries of Pre-Conquest foundation, the parishioners of Ramsey would have had rights in the Monastic church.

In the 12th century stricter rules, and more elaborate services like the Sunday procession were introduced. The parochial services would then have probably interfered with those of the monks. Accommodation for the parishioners would be normally made outside the monastic church in a parochial chapel.

Probably because of this, a chapel, to serve the people of the town was built at Bury, which was in the banlieu area and close to Ramsey. In 1139, Pope Innocent the II refers to Bury chapel just after it was built, as being situated near to the monastery. Where the Abbot’s servants (parishioners) could hear Divine service. (VCH)

The Vicar of Ramsey parish is mentioned as early as the reign of Edward III, in 1362, and a house for him to live in is mentioned at that date. So he obviously lived separately from the monks in the Monastery.

Standing at the south-west angle of the church, it will be seen that the west wall has been cut through vertically on each side of the tower and the aisle wall heightened with rubble work. Originally there was no tower, only a belfry.

The last Abbot of Ramsey, John Lawrence, by his will dated 29th February 1537, ordered his executors to pay ‘towards the building of a Stepule in the Parish Church of Ramsey when the town will build it, £13.6s.8d’ but the town never seems to have done anything except build a ‘low wooden steeple’ or belfry.

When the belfry fell, the Churchwardens in 1672 ‘took stone from the Abbey’ and built the present tower. Black suggests one of the ruined towers of the abbey was taken down and rebuilt in the new position and patched as required.

Apparently the original entrance arch and columns of the churchyard were carried back and rebuilt into the east side of the tower, to become the door into the of the church. The outer door has no affinity with the interior work; it is a fine, deeply recessed round headed arch. In one capital there are coiled serpents meeting at the angle in one serpent’s head. The bell-openings and other places show clearly the reuse of older materials. The clock-face almost obliterates a very early 13th century window. Those on the stage above are later, and there are some curious bosses inserted at the corners beneath the battlement.

The lintel of the door by which the belfry is entered is made of a portion of coped coffin lid, which has once covered the resting place of an Abbot or Prior. Another is in the wall of the south-west corner of the church, and another now covers the grave of Mr G Jones, at the east end of the church. Still another of more elaborate workmanship has been carried off to Broughton. There was in the old Vicarage garden (now the Ramsey Club House) the capital of a large column with the same interlaced work as in the western door of the tower. (31)