The men employed in widening the carriage drive to the Abbey discovered last week, about 20 inches below the surface, four stone coffins three of which were deposited side-by-side and and the other a few yards off. The coffins vary in size and length, and would seem to have been made to order, each coffin being occupied by a skeleton ( all, more or less, in a good state of preservation) and adapted to the size and cranial proportions of its occupant, there being a circular cavity in each of the stone receptacles for the reception of the hinder part of the skull.

One of the coffins measured 6’6″ in length in the inside, and enclosed the colossal remains of a person that height, showing that there were something like giants in those days. Another of the coffins measured 5’6″, and contained the skeleton of a person whose cranial logical confirmation would scarcely, in the opinion of the phrenology is, denote quandom possession of the brain of much intellectual power.

There is no data to assist us in arriving at any satisfactory conclusion as to the time when the interments took place. Whether, as it’s supposed, that the part of the grounds in which they are found is the site of ancient burial ground connected to the Abbey; all that the churchyard formerly included this space is not easy to determine.

It would seem that one or more stone coffins similar in every respect have been, within the memory of some of the older inhabitants, taken out of the walls of the Abbey while carrying out certain alterations; and it may be the coffins to which we are referred were discovered at a very much earlier period, and removed out of the way by re-interment in the spot in which they are now found.

This hypothesis would, perhaps, explain the fact of their being found so near to the surface, and of the whole of the coffins being destitute of lids, the thorough decay of the bodies rendering the coverings unnecessary.

Discovery of Another Stone Coffin

Since forwarding the paragraph last week another stone coffin, making the fifth, has been discovered in a line with the other four. This one is about 18 inches wide at the head, and contains two entire skeletons ( in a good state of preservation) lying by side, and two other skulls placed at the foot of the coffin. atThere are no cavities in this one of the reception of the heads, and the two occupants of the coffin were buried with their faces downwards.

This circumstance, and the facts of two other skulls been found in the same coffin, strongly support the opinion that the spot where they are now found is not the original place of their supulture; but where they have been re-interred, as we ventured to suggest last week( centuries probably), subsequently. The coffins have not been disturbed, but remained where they were found and are now covered up.

Below is a diagram, showing roughly where the five coffins were found. It shows the house, the drive, coffins and gatehouse. It is marked with the date fifth of October 1912. 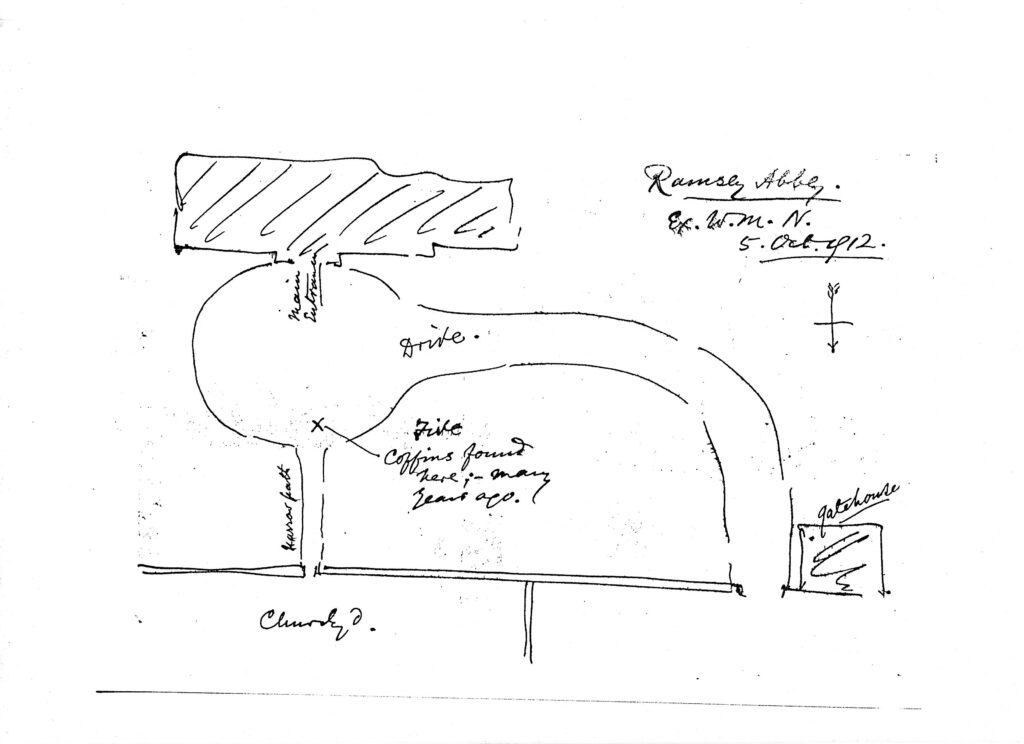