In November 1675 Henry Cromwell’s heirs sold the Ramsey Estate to Silus Titus of Bushey in Hertfordshire who was from a family that was probably Italian in origin.

Titus studied at Oxford and the Middle Temple London and at the start of the Civil War fought on the side of Parliment. However by 1647 he had become a fervent royalist and unsucessfully plotted the King’s escape from Carisbrooke Castle. After the King’s execution Titus was involved in intrigue and sent as an agent of the English Presbyterians to Jersey. On being discovered Titus was prevented from returning to England. He subsequently became an agent of George Villiers 2nd Duke of Buckingham and also under the pseudonym “Jennings”, acted as the chief intermediary between the Royalists and the levellers. He assisted in plotting a rising against Cromwell and may also have helped in writing the pamphlet “Killing no Murder”.

After Cromwells natural death in 1658 Titus helped in the Royalist insurrection of 1659. He became an MP, was rewarded three thousand pounds for his services to the Royal cause and made keeper of Deal Castle.

He remained in politics and was an MP from 1659-1695 for various boroughs. During this time he was known as …… speaker and he spoke, as a committed, protestant, against allowing a Catholic sovereign to ascend the throne. ……expedient though Titus was not against accepting a seat on the Privy Council when the Catholic King James did finally ascend the throne. Consummate that he was he transferred his alleigance when William was proclaimed joint ruler with Mary in 1688. His political career finally ended with his defeat at Huntingdon in 1695. 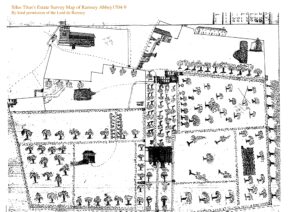 When he died, in 1704, he left the Manor of Ramsey,shown left, and all other properties in Huntingdonshire to his wife Katherine ….to be sold and the proceeds to be divided between her and her two daughters, Susannah and Katherine.

Katherine Titus wrote her will in 1726, leaving all the property in Ramsey to her servants John Smith and Catherine ….who subsequently sold the Manor of Ramsey, the site of the Abbey, to William Fellowes in trust for his brother Coulson Fellowes.