Created:2nd quarter of the 12th century         Formats:Manuscript       Usage terms: Public Domain in most countries other than the UK. 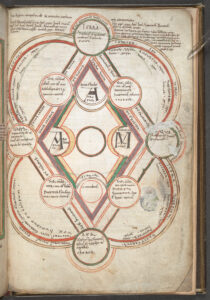 Description
The Enchiridion (Handbook) by Byrhtferth of Ramsey Abbey (fl. c. 986–c. 1016) is a commentary on the computus, covering a range of topics concerning time reckoning, including mathematics and astronomy.
Byrhtferth’s own computus does not survive but there are three 12th-century manuscripts which may transmit some of its contents – this is the fragment of one of them. It also includes writings by Abbo of Fleury (b. 945, d. 1004), Byrhtferth’s former teacher.
The diagrams in this manuscript were used for measuring the ratio of geometric shapes, calculating the date of Easter, and predicting if a person’s illness was going to be fatal. Others demonstrated how to identify the winds and divide branches of knowledge into subject groups.
One diagram on the harmony of the microcosm and the macrocosm summarised Byrhtferth’s view of how the level of man (the microcosm) extends on a larger scale to the celestial world (macrocosm). Formed of arches and diamonds, the inner circle contains the first letters of the Greek language terms for east (anathole), west (disis), north (arcton) and south (mesembrios). These letters form the name ‘Adam’ when read in the form of the sign of the cross.
Circles in the outer circuit designate in Latin Terra (earth), Aer (air), Ignis (fire), and Aqua (water). Moving clockwise from bottom left, the four seasons are situated between the elements. For example, Estas (summer) is characterised as warm and dry, so it has been placed between fire and earth.

This manuscript was digitised with the support of The Polonsky Foundation.