Here are some of the latest developments in the interpretation of the layout and Precinct boundaries of Ramsey Abbey, the two new drawings below show a conjectural drawing very similar to the Tony Baggs model B, and another precinct enclosure drawing.
The first drawing shows a slight difference between the Baggs Model B plan, where the North end of the transept wall is tucked into the dog-leg of the church yard wall and this model which I will call Model C, which shows the West end of the North Nave wall being tucked into the dog-leg. 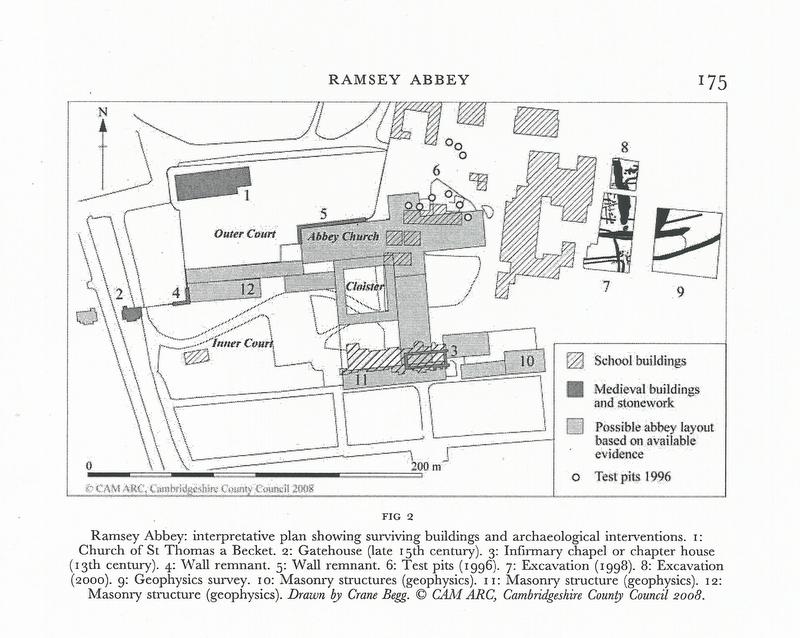 As you can see this shifts the whole Abbey building quite a distance to the East and near enough lines up the South transept with the 13th century fabric (Lady Chapel ?) in the Abbey School basement. This seems to support the theory that it more likely represents an infirmary chapel or a chapter house located on the south-east of the cloistral range, rather than the lost Lady Chapel as indicated in previous publications. This drawing also shows the proposed outer and inner courts of the Abbey.

This is an Interpretive map showing the Abbey Precinct enclosure, marked in green and possible lodes (waterways) in blue. The area covered by this enclosure measures approximately 800m North to South and 550m East to West, with the long axis aligned North-Northwest to South-southeast, and would enclose an area of roughly 35 hectares (86 acres). This enclosed area at Ramsey compares well with other Abbey precincts, both Benedictine and Cistercian. The precinct at the Benedictine Abbey at Peterborough is 600m x 250m, and those at the Cistercian Abbeys of Fountains and Rievaulx are comparable at 800 – 1000m by 400 -700m.

A large early ditch is seen to form the southeastern part of a large oval enclosure (A on the map) lining up with a curving woodland boundary at the south-southeastern (B) and marked by the line of Hollow Lane around the south and west (C) it then carries on almost to the High Street.

There is a break in the enclosure at the west where the church and Church Green, within the enclosure, face onto the old market place (Little Whyte area) and the town beyond it. It then continues for a short length along part of New Road to the north of the market (D) where the continuous curve of the enclosure ends.

The Royal Commission for Historic Monuments recorded the more obvious earthworks in the 1960s. They recorded Booth’s Hill, the Anarchy fortification, at the extreme south of the Abbey precinct (E), and the extreme north a cluster of very large rectangular pits (F) one of which was still shown as a pond. These lay at the northwestern terminus of a large earthwork ditch that curved around to the east and south and would form the northeastern part of the enclosure (G)

From these pond-like earthworks (F) to the western side of the enclosure at New Road corner the enclosure ditch is replaced by the line of a ditch or channel (H).

More in depth information about the enclosure and causeways can be found in the Cambridgeshire Archaeology Archaeological Field Units report, CCC AFU Report Number 894.

This Drawing shows a different interpretation to the 2006 precinct drawing. The biggest difference is that the SW boundary extends about 80m west of Hollow Lane and cuts across the High Street about half way down.
This is where it is thought, the original Main Gate of the Abbey would have been situated. It would have have led into the outer court which contained the guesthouse built c 1180-90, converted into the church for the new parish of Ramsey( the Thomas a Becket Church ) c1222. This suggests that the surviving gatehouse fragment could have been for linking the outer and inner courts which led to the main Abbey and it’s associated buildings.
Ref (29)
Back