After the dissolution of the Monastery in 1539 the Abbey site, Church, steeple, and churchyard, the lordships and manors of Ramsey, “Heyghmongrove”(Hepmangrove), Bury. Together with other manors, and the granges or farms called Biggin, Higney, Bodsey,and Worlick House, a windmill in Ramsey, the park called Ramsey Park divers lands, woods, fens and marshes and the impropriate rectory of Ramsey were on the 4th March 1539-40 granted to Sir Richard Williams alias Cromwell in payment for his good services, for a fee of £29 – 16s. It would appear that Sir Richard used the Abbey buildings as a source of profit, by selling the building material. (VCH)

The Cromwells continued to use Ramsey Abbey as a quarry well into the 17th century, until Sir Henry Cromwell son of Sir Richard decided to build the Tudor house from what was left of the Abbey materials, incorporating them into the part surviving 13th century Lady chapel ? He is said to have used it as a summer residence.

Sir Henry’s son Sir Oliver ( not the Protector ) lived at Hinchingbrooke until 1627, when he sold it to Sir Sydney Montagu, because of financial difficulties.

Sir Oliver then came to live at Ramsey Abbey House, which at that time was comparatively small, consisting of the eastern part of the present building, as shown below.

It was three stories in height, facing north, with the present four-storied towers at the north east and the north west corners. Forming the main eastern portion of the basement of the house is a large rectangular building, 68 ft. by 23 ft ( internal measurements ) running east west, which has been cut into various sized rooms.

It dates from the middle of the 13th century and obviously was a part of the monastic buildings. It is divided into six bays by buttresses, and around its internal walls are trefoiled arches with moulded foliated capitals and moulded bases, now badly mutilated. The west wall of the building is thicker than the other walls and is possibly of the 12th century.

There were doorways on each side of the second bay, from the west; the north belongs to the time of the building of the house, and the south, now blocked, is 13th century. The original windows were above the surviving part of the building, the remains of one can still be seen in the modern corridor.

There is a manuscript description now in the British Museum which seems to refer to the refectory (or Lady Chapel), it says —

” It was a * * * * * plane of three squares above, (i.e. three times as long as wide) 24 yards by 8. The walls have been raised a little, a building added in the north side towards the west, and a tower on the same side towards the east, and stairs and bow window to the south.” ( Ref 7 )

There have been two suggestions as to what this building might have been used for; one a refectory and two a Lady Chapel. (VCH) 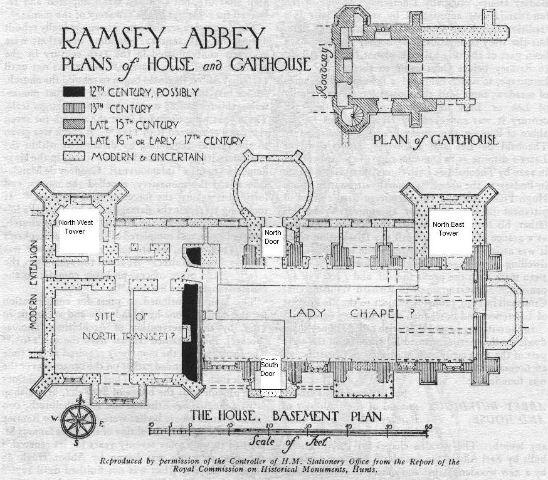 Henry Cromwell was the last male representative of the eldest branch of the Cromwell family and was married to Hanna Cromwell (nee Williams), of Upwood, a relative, they had no children. When Henry died in 1673 the Abbey and estates devolved to his two sisters Carina, who married William Hetley Esq.of Broughton, and Elizabeth, who married Henry English Esq.a Norfolk gentleman.

Carina and Elizabeth sold the remains of the Abbey property to Colonel Titus in 1674. At that time the property had been reduced in size, due to frequent sales to meet the liabilities of its owners, to such an extent that it was worth only £2000 per annum.

When Colonel Titus died he left the Abbey to his wife and two daughters, the survivor, Catherine died in 1732, and left the Manor of Ramsey with an estate of about £2000 per annum to two of her servants, John Smith and Catherine Gosford .

On November 28th 1734 the Abbey was visited by Mr Jones, the Curate of Abbots Ripton and Dr Knight , Archdeacon of Berkshire and a Prependary of Ely. They were curious to see what records, if any still existed of the Abbey.

They were taken to an upper room where the records were kept, and were amazed to see just how many there were, and decided there were enough to fill a cart. The records consisted mainly of Grants and Donations to the Abbey, and Rent Rolls, all of which were mostly written on parchment. Many of them had been gnawed by rats and mice and a large number of their seals had been broken. All of the records were jumbled up and piled together.

The Curate and Dr Knight decided that it would take at least a month or more to sort them and so, discretion being the better part of valour, they decided to return in the spring when it was warmer.