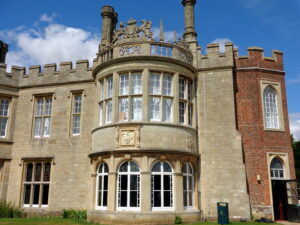 A priory of Benedictine nuns, known until the 15th century as St. James-extra-Huntingdon and since as HINCHINGBROOKE PRIORY (Hychelingbrok, xiii cent.; Inchinbrok, xiv cent.; Fynchyngbroke, Fynchynbrok, Fincheynbrok, xv cent.; Hynchenbrok, xvi cent.) lay to the west of the town boundaries. The few historical facts relating to the priory have already been given. The patronage was attached to the Honour of Huntingdon whose holders were great benefactors to the nunnery in the 12th century, William the Lion granting them lands here. In 1199 King John remitted 15s. rent due from 60 acres of meadow before their gates. These royal gifts were supplemented by numerous private benefactions, until at the Dissolution the temporalities included in Huntingdon 90 acres of arable and 20 acres of meadow, the vineyard pasture, a close and dovecot near the priory and a profit of 20d. from courts.

In December 1535 Dr. Leigh visited the priory, where the last prioress lay dying. He commissioned the Prior of Huntingdon to take an inventory of the priory’s goods and lock the coffers till Cromwell’s pleasure was known and the following year Hinchingbrooke suffered the fate of the smaller houses and was suppressed.
In 1538 Richard Williams alias Cromwell received a royal grant of the priory with its ‘church, steeple, churchyard and house and all lands.’
Sir Richard Cromwell died in 1544. He had acquired Ramsey Abbey and lands of other religious houses and does not appear to have lived at Hinchingbrooke, which was about this time occupied by William Cook, who sublet part of the house and barn together with the stable, gate-house and great close. Sir Henry, eldest son of Sir Richard, used Hinchingbrooke as a winter residence. He pulled down part of the nunnery and erected a fine Elizabethan house surrounded by an open court in its place. The new building was mainly composed of materials brought from Barnwell Priory, particularly the gilded roof of the great dining-hall.

On account of his profuse liberality and magnificence Sir Henry Cromwell was known in his day as the Golden Knight, and it is related of him that in his progresses from Hinchingbrooke to Ramsey Abbey, his summer residence, he threw money out of his coach to the people who collected to see him pass. He was four times sheriff for the county and once returned as member. He entertained Queen Elizabeth here in 1564 when she knighted him. James I also spent a night here, 27 April 1603, when progressing south to take possession of the English throne. Sir Oliver on this occasion made many presents to the king, ‘a cup of gold, goodly horses, deepe-mouthed hounds, divers hawkes of excellent winge,’ while a deputation of the heads of Cambridge University, clad in scarlet gowns and corner caps, attended to present a learned oration in Latin. In return for this gratification of his favourite foibles James I on his Coronation Day, 24 July 1603, made Sir Oliver a Knight of the Bath.

Sir Henry died a few months later on 6 January 1604 and was buried in All Saints’ Church, Huntingdon. His lavish methods appear already to have impaired the family fortunes and the circumstances of Sir Oliver Cromwell, his eldest son, to whom Hinchingbrooke now passed, shortly became hopelessly embarrassed. He carried on the family tradition of entertaining royalty, and James I was constantly there. The king indeed seems to have treated the place as his own: in 1614 he is found appointing a Keeper of the Wardrobe to act both at Royston (where he had his own hunting box) and Hinchingbrooke; in 1620 he advanced £20 from the royal treasury and 20 timber trees to build a bridge for his own use there; in October 1623 he issued instructions to Sir Oliver to kill as many pheasants in the outwoods as possible but none in the park, pending his arrival.

His embarrassments must necessarily have made a bad host of Sir Oliver Cromwell, and the king appears to have conceived some idea of buying Hinchingbrooke outright. This appears from a pathetic letter written early in 1623 by Cromwell, who says he has asked no more for his house than a penny for a pennyworth and begs payment either in money or land as his creditors are pressing him and his friends begin to think him out of favour. The matter still remained unsettled in November 1624 when Cromwell asked whether the king would accept of his land at a reasonable price. The death of James I in March 1625 put an end to the question of the royal purchase and Hinchingbrooke was eventually sold to Sir Sidney Montagu on 20 June 1627.

Sir Sidney Montagu was one of the Masters of Requests to Charles I and an ardent supporter of the royalist side in the Civil War. He died in 1644 and the estate passed to his son Edward Montagu, who served on the Parliamentarian side during the first Civil War. Charles I slept at Hinchinbrooke in 1647 on his way from Holmby to Newmarket, a prisoner in the hands of Cornet Joyce, and was treated with the greatest consideration by Lady Montagu in the absence of her husband. Edward Montagu took no active share in the second war nor in the king’s trial. With General Monk he was mainly instrumental in bringing about the Restoration and was rewarded, on 12 July 1660, with the title Baron Montagu of St. Neots, Viscount Hinchinbrooke and Earl of Sandwich. Hinchinbrooke has remained the seat of the Earls of Sandwich till the present day.

The Earl of Sandwich was second cousin to and patron of Samuel Pepys and Hinchinbrooke and its owner figure largely in his Diary. The earl immediately started elaborate alterations and additions to the Elizabethan mansion: under 9 December 1660 Pepys notes that he (Pepys) has commissioned Mr. Kennard, master joiner at Whitehall, to go to Hinchingbrooke about the alterations, and nearly twelve months later he complains that they are very backward. On 15 October 1664 he visited Hinchinbrooke and found the ‘water-works and the Ora, which is very fine; and so is the house all over, but I am sorry to think of the money at this time spent therein.’
There are few visible remains of the Benedictine nunnery, but a considerable number of 12th and 13th-century stones lying in a ditch on the south side of the garden were, no doubt, from its early buildings.

The claustral buildings of the nunnery were on the north side of the church, and in building his new house Sir Henry seems to have found the north wall of the church still standing, and against it, on the site of the church, he built two rooms (now the library), and on the other side, on the site of the cloister, he built a staircase, etc.; the eastern wall and some other parts of the eastern range of the nunnery remained, and these he converted into drawing room and private dining room, etc., with a long gallery over them. Of the northern range nothing remains, but here Sir Henry built the hall of his house, enriching it with a fine bay window and building another bay window at the northern end of his drawing room and long gallery; he retained an inner courtyard on the site of the cloister, the western wall of which appears to be ancient, but Sir Henry probably built kitchens and offices on the west of it (now the dining room), and a tower at the south-west corner; he built a range of offices extending northward from the north-west corner of the house, a range of outbuildings near it, and a large gate-house on the north side of his entrance courtyard.

Sir Henry lived to a great age, and before his death he apparently made over the house to his son, Sir Oliver, who, in 1602, built a large semi-circular bow window on the east side of the long gallery, supporting it upon an open loggia below. This bow window it is said came from the Abbot’s house at Ramsey Abbey.
Edward Earl of Sandwich made considerable alterations here in 1661, adding two stories to the western range together with an addition at the northwest corner, formed a kitchen in the projecting northern wing, and rebuilt the staircase. He appears to have done other works, including the building of the garden wall next the road in 1663–4.
In 1760 the 4th earl made some alterations and is said to have added two or three rooms, but probably the work was chiefly of the nature of readjustment rather than actual addition.

The eastern range was severely damaged by fire on the 22 January 1830, but the pictures and furniture were nearly all saved. The fire started in the fireplace of ‘the great-bow room’ (i.e., the bedroom formed in the end of the long gallery), whereupon the house was largely reconstructed under Edward Blore, the architect, and completed in 1832. The east and south fronts were now largely refaced, and the semi-circular bow-window of 1602 was taken down and rebuilt on the south front. A tower was built at the north-west corner, reducing the length of the hall, which was much altered. From: ‘The borough of Huntingdon: Introduction, castle and borough’. (ref 30)
Back